Welcome to this week’s quick social media tip. Today I want you to show you how to create Twitter threads.

If you spend any time on Twitter you’ve probably already come across a Twitter thread, but perhaps not know that it was a thread.  Threads are a series of related tweets shared in succession by one person.

With a thread, you can provide additional context, an update, or an extended point by connecting multiple tweets together. When used well, threads are a powerful way to illustrate a larger point.

Before threads, users would have to just continue replying to their own Tweets in order to link them together. This was a  way to work around the old 140 character limit.

4. Continue in this way adding threads until you’ve said all you want to say.  You can either publish the entire thread by hitting “Tweet All”…. 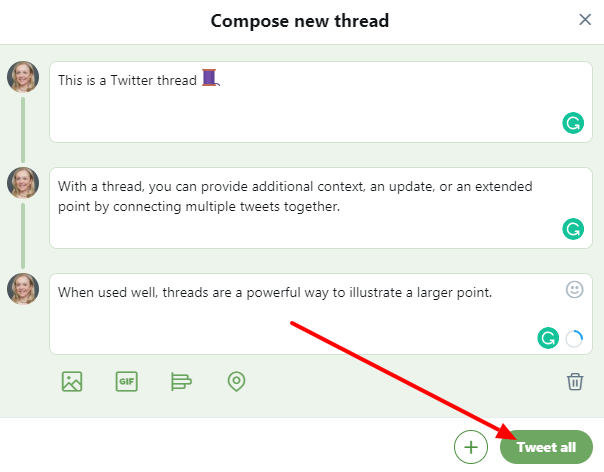 Or you can hit post each tweet in succession, which allows you to build momentum, perfect for a live event or an ongoing train of thought.

Publishing the entire thread gives your followers a fully-formed story — a better choice for a message you want to control a bit more, like a nuanced company announcement.

Here’s how your published displays on Twitter when complete.

Check out this guide to Twitter threads on Twitter’s business blog.

Here’s to your social media success!