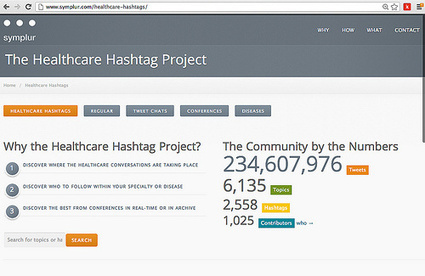 Librarians have been geeking out, or grossing out, over hashtags since they first appeared. Some of the conversation has been about concerns over ‘allowing’ the public to define their own metadata, while much of it has been the flip side of trying to engage the public in generating metadata for library online collections, and thus enriching access and awareness for those collections.

Naturally, the general public simply move forward with creating new hashtags for their own purposes, largely unaware of the conversations and concerns of professionals in the area of metadata. This is as it should be.

The idea of a Folksonomy, a.k.a. folk taxonomy, as originated by Thomas Vanderwal centers around the social aspect — real people, real folk, coming up with language that means something to them to describe content that matters to them with ideas that matter to them. Meaning.

I could go on about this for a long time, but today I need to focus on a particular aspect of this dynamic — a shift from folk+taxonomy to folk+ontology. Folkology? Folk ontology? Folktology? A little bit of digging leads me tofolktology (non-scholarly) or tagontology (scholarly) as preferred terms for this, both of which are used roughly the same amount.

In social media, one of the greatest strengths has been the power to create community where none existed before, to connect and empower those who may otherwise be isolated. The most prominent examples of this in healthcare have been the emerging communities around chronic conditions (such as diabetes), marginalized communities (such as facial difference and transgendered), and conditions that create isolation as part of the lifestyle or treatment of the condition (such as mobility disorders, many types of cancer, and any condition expected to be fatal).