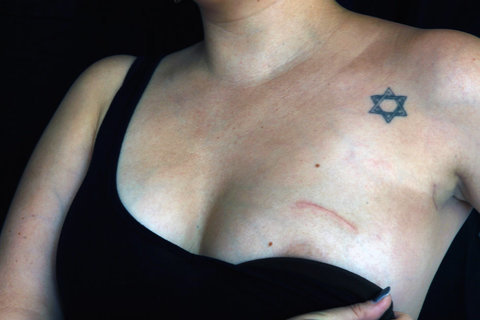 “Many Times readers were disturbed and offended by the front-page photograph of an Israeli woman’s upper torso in Wednesday’s newspaper. It was the dominant image on the page, and it accompanied an article in a series called “The Cancer Divide,” which is examining “how the treatment of breast cancer is shaped by wealth and poverty, culture and values.”

The article explored the high rate of breast cancer in Israel, and an effort to test for the cancer gene in a country where there is also a low rate of preventive mastectomies. Some readers drew a connection between this startling photograph – which showed some of the woman’s areola, an incision scar, and her Star of David tattoo, but did not show her face – and a front-page photograph in Sunday’s Times, which showed the body, but not the face, of a Florida woman, Michelle O’Connell.

The breast cancer photo was taken by Rina Castelnuovo, a contract photographer for The Times in Tel Aviv.