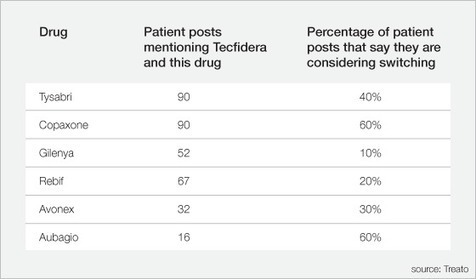 Social media can also, to some degree, explain events and not just record them, since patient posts are much more nuanced than purchase data, often sharing the why and not just the what.

Using older methods, it can take years to understand the result and impact of a new drug launch. Today social media can provide early vital signals in real time.

To illustrate this, let’s look at Tecfidera (formerly called BG-12 during clinical trials), a new multiple sclerosis drug that Biogen launched on April 13 [through an examination of the patient voice from billions of patient-written social media posts on over 2,000 health blogs and forums].